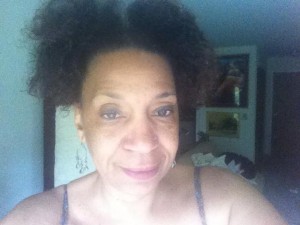 Like many African American women I have had a love/hate/love history with my hair. I have worn it long, short, straight, braided, twisted and natural. I have covered it with wigs and had it dyed every shade of red imaginable and even a few shades of blonde. We, my hair and I, have traveled a long way to get to the place of love we share today.

You see I was born that middle child. I was supposed to be the long awaited son but instead they got me. Unlike my older sister with her fine curly “good” hair, I came into the world with a head full of thick, unruly, ‘had a mind of its own’ hair.

If my mother braided it in pig tails, it didn’t lay flat like my sisters. After a few hours of play, it would work its way free from the rubber bands and rise up, so my mother and aunties would say, like “someone had sprinkled baking powder on it.”

When appearance really mattered I would sit between my mother’s or aunt’s knees, my head in a knee-lock vice grip, and have it braided so tight my head would hurt. I’d cry “Take it easy” but my hair was a beast and taming it could not be done by “taking it easy.”

One year there was a big wedding. Relatives came from far and wide. When time came for hair combing I started to cry before my mother even touched me because I knew she was going to pull those braids so tight my toes were going to curl.

Aunt Helen who was in from North Carolina asked me what was wrong to which my sister answered “She doesn’t have ‘good’ hair like me. Mommy has to really comb it hard to make it look nice and it’s going to hurt.” She probably giggled (yes she was that kind of big sister.)

Well Aunt Helen looked at me and said “Come here baby. There’s nothing wrong with this child’s hair. You just have to work with it.” She took the comb and brush from my mother, worked a little hair magic and when she was done I was rocking my first set of Afro Puffs.

When I saw the photo on face book of the smiling little girl with her Afro Puffs above the headline that an Ohio School was banning Afro Puffs and braids I felt a pang in my heart.

Horizon Science Academy in Ohio sent a letter to parents including a ban on some Natural hair styles including Puffs as not in keeping with their dress code.

Seriously in 2013 natural hair banned, lumped in with other personal appearance bans like Mohawks, hair dye and body piercings!!!

Ironically I read this post on the same day my city Detroit, Michigan celebrated the 50th anniversary of the March in Detroit where Dr. King first gave his I have a dream speech in 1963.  We all remember his dream for his four little children (two were little girls) that they would “one day live in a nation where they will not be judged by the color of their skin but by the content of their character.”

I’m sure if he were alive today; Dr. King would look at that photo of that beautiful child with her puffs and see his own daughters Yolanda and Bernice.

Maybe he’d remember seeing their heads locked in that knee vice grip, remember hearing them cry as their mother or auntie braided or pressed their hair so it would be acceptable to a world where little black girls were repeatedly told they weren’t good enough, weren’t pretty enough.

I’m thinking he’d feel more than a pang in his heart that in 2013 the quintessential pretty black child look, the Afro Puff, along with braids and natural hair would be banned as unacceptable to Horizon Science Academy’s dress code. .

I believe he would see that speaking out against this ban and talking about instilling self-love in our children was part and partial of not being judged by the color of their skin but by the content of their character if the dream is to ever be fulfilled.

Don’t get me wrong I’m not pointing the finger solely at Horizon, this decision did not come in a vacuum. We need only look at the community in the mirror with our penchant for assimilation, each generation getting further and further away from being black as we become more multi-racial, people of color to see how any school board could so blindly see this as just a matter of personal appearance on the same level of body piercing.

I bet Dr. King would be mad as hell, not just at Horizon but at us as community for still allowing our beautiful black children to be seen through a lens of beauty that denies our history, culture and inherent African American beauty

When I saw the photo on face book of the smiling little girl with her Afro Puffs, I remembered all those years I thought I was not pretty and some of the questionable choices I’ve made (like the blond hair) trying to fit someone else’s idea of pretty.

I think of all those dollars I spent on hair products trying to tame my hair so I would look “more professional” when trying to get a job, knowing my black skin was already a strike against me.

I think about how it still stung a little, just recently when someone asked me if I combed my beautiful natural hair and how appalled I am that people still ask if they can touch my hair (yes my hair, part of me  not IT).

Although my first thought was to twist up my Afro puffs, gas up the car and head down to OHIO, instead I twisted up the puffs, gassed up the car and went over to visit my nieces. The youngest was wearing her puffs too. I told her “I love your puffs.” I gave her a big hug and said YOU ARE BEAUTIFUL!